According to the National Sleep Foundation, approximately 18 million Americans suffer from sleep apnea, while many don’t even know that they have it. Watch the video above to see testimonials from real people who have mitigated sleep apnea by playing the didgeridoo.

Sleep apnea is a condition in which the airway between the nose and lungs is blocked, causing interruption of sleep and low energy levels throughout the day. People diagnosed with sleep apnea are often prescribed a range of treatment options, most often CPAP (continuous positive airway pressure) devices and surgeries. Now there’s a natural way to help with breathing at night: a study published by the British Medical Journal indicates that playing the didgeridoo can make a difference.

How can playing a wind instrument improve sleep?

When can users expect results?

The clinical study indicates that after 3 months of daily practice, many people experience significant improvements in their breathing during sleep and lowered incidence of fatigue during the day. Didge For Sleep is an easy to follow step-by-step method that can be done in the comfort of the home. 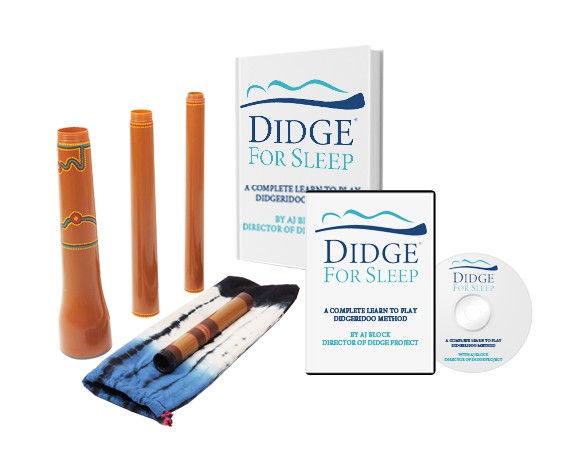 The Didge For Sleep Introductory Package is specifically designed as a solution for people with sleep apnea, snoring, and other sleep-breathing conditions. Each package comes with a travel didgeridoo, an instructional DVD (also streamable online), a handbook (also downloadable as an eBook), and an online support forum where users can connect with a community of people using the didgeridoo for better sleep. Additionally, users receive over 10 hours of video tutorials.

Get started with your Didge For Sleep Introductory Package today. Visit us at www.didgeforsleep.com.