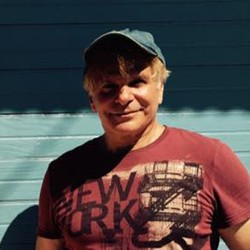 “I’ve had breathing problems during sleep for at least a year and a half, maybe much longer: snoring, gasping for breath when I was sleeping. At best it was a loud snore. I have now been playing didgeridoo for sleep apnea for about two months and I’ve been practicing four or five times a week for about thirty minutes a day. This past weekend I was at my friend’s house and he said that throughout the night my breathing was just beautiful. He was so thrilled to hear such a difference, just quiet constant breathing. I’m very proud of that. Using the didgeridoo as a natural sleep apnea therapy has led to a big change in my life.”
– Paul Auerbach, educator

Is There Evidence That Playing Didgeridoo For Sleep Apnea Can Help People?

In 2005 The British Medical Journal reported on a successful study conducted at the University of Zurich in which researchers hypothesized that regular didgeridoo playing could be an effective treatment for obstructive sleep apnea. The sleeping disorder is characterized by pauses in breathing during sleep, often leading to daytime restlessness.

Participants, mostly men aged around 50 and experiencing high amounts of daytime sleepiness, were to learn to play the didgeridoo by taking periodic lessons and practicing at least 20 minutes per day, 5 days a week for four months. All participants used identical acrylic didgeridoos (as seen in the first photo). In this natural sleep apnea therapy, participants were given four lessons as follows (quoted directly from the study):

1. Participants learned the lip technique to produce and hold the keynote for 20-30 seconds

3. The didgeridoo instructor taught the participants his technique to further optimize the complex interaction between the lips, the vocal tract, and circular breathing so that the vibrations in the upper airway are more readily transmitted to the lower airways

4. The instructor and the participants repeated the basics of didgeridoo playing and made corrections when necessary

What were the results of the didgeridoo for sleep apnea study?

The most significant indicator used in the study is the Epworth scale, a measurement of daytime sleepiness (the higher one measures on the scale, the more daytime sleepiness the person experiences). The figure below shows that those who practiced the didgeridoo saw their level of daytime sleepiness decrease, while those in the control group saw various changes, including testing better, the same and far worse.

The didgeridoo for sleep apnea study was hailed as a success but only through continued research will we know the true effects of playing the didgeridoo to treat sleep apnea. It is unclear the level to which the participants mastered circular breathing, a technique which often challenges newer didge players. Enhanced results could potentially be found in longer experiment periods (greater than four months) and more in-depth and frequent didge lessons.

What is the best way to start playing didgeridoo for sleep apnea?


After seeing positive results working with over 50 people with sleep apnea, I decided to create a method book and video that anyone could use to learn to play didgeridoo, right in their own home. Thus, Didge For Sleep was created. Didge For Sleep is a DVD and Handbook (also available online) designed specifically to teach the didgeridoo to people with sleep apnea, snoring and other related conditions. Focusing particularly on strengthening the muscles of the throat and tongue and the entire respiratory system, this course starts with the absolute basics of breathing and gradually increases in difficulty up through some fun intermediate level rhythms.

Watch out how Didge For Sleep works:

Want to learn to play didgeridoo directly with a teacher? Check out our current course offerings.