What are the similarities and differences between handpans and RAV drums? They are both made of steel and they both sound amazing, but one has a longer sustain than the other, and there is quite a different character to the sound. In this video we look at the Aura Handpan vs. RAV Drum (the newly updated 2019 model) in the same identical Celtic Minor scale. We actually used both the B Celtic Minor and D Celtic Minor versions of both Aura and RAV, so you will see 4 different pans in this video. This is a literal side by side comparison where we play each pan note for note and compare how they sound.

Hey guys this is AJ from Didge Project. I’m very excited to welcome back Matt Bazgier to the channel. He is going to show us the similarities and differences between the RAV Vast and the Aura Handpans. For those of you who don’t know about Aura, they are designed in the same way as the original PanArt Hang (aka Hang Drum), made here in the USA by Jon Antzoulis. Without further ado, here’s Matt Bazgier:

Hello everybody. My name is Matt Bazgier and I’m excited today because we’ve got Aura Handpans and RAV Drums in the same identical scales and we are going to do a a side-by-side comparison. Now there’s quite a difference in price between the two, they’re slightly different in material and look but they both have amazing sounds. We have both of these instruments in the B Celtic Minor and D Celtic Minor scales, so we will literally be hearing them side by side. Make sure to watch the video to hear the difference. Ready to see the similarities and differences, Handpan vs. RAV Drum?

The first thing we see is that the instruments look a little bit different. They both have the same 9 note sequence with the same root note in the middle. They’re both very well built instruments, polished and shiny. The RAV Drum, starting in 2019, is now made with a golden ring around the edge, which I think looks great.

When it comes to the sound there are slight differences between these two instruments. The Aura Handpan, and most handpans, have a sharper attack (meaning a stronger beginning of the sound) and shorter sustain than the RAV Drum. The RAV definitely has a much longer sustain (meaning the sound lasts longer), and the sound is deeper and I would say more meditative. The sound of the handpan is very rich and full especially when you hit the note you can hear the attack very crisp and clear, i.e., you can hear the sound of your finger touching the drum and it gives you a high pitch slap sound. Compared to the RAV Drum, the sustain on the handpan is not as long.

What I really love about the Celtic minor scale is that it doesn’t have a vibe of a typical minor scale. It’s reflective and meditative and kind of happy and uplifting in the same time.

Let’s talk about the harmonics and sustain of the Handpan vs. RAV Drum. Again, in the handpan, the harmonics are very very rich within one note and you can really dive deep into the sound and start to discover the richness of multiple layers of sound. Once you combine one note with the other notes it’s just a completely amazing experience. Although the sustain of the handpan is not as long as the RAV Drum, the first moment of the projection of the sound is very full and round for me. The sound of the Aura Handpan immediately put my mind into the right place.

The RAV Drum is the perfect instrument for all kinds of meditations and its sound immediately calms me down. I use it a lot in all kinds of sound meditations and sound baths and it brings a quality of peace and serenity. Make sure to listen to me playing in the video here so you really get a feel for what I am talking about. One of the greatest parts about the RAV Drum is the sustain of the notes. The sound lasts a long time so you can actually play slow melodies and really go deep into the sound and study the richness of it because each note has around at least 20 30 seconds of sustain. It’s a percussive instrument but sometimes it sounds a little bit like a bell or chime. The attack is maybe not so sharp as in case of the Handpan but the way the notes sound together is definitely a different experience.

Since we have both the RAV Vast and the Aura Handpan in the same identical scales (both B Celtic and D Celtic Minor), I’m going to do a note by note comparison. The D Celtic drum is higher than the B Celtic, so if you want a lower sound, I would go with the B Celtic. D Celtic is very popular for playing with other musicians because D Minor is a very common key on many instruments. B Minor is less common for guitar, piano, etc.

So what is the ding note? The ding is the note in the name of the scale (in this case, B or D), which is the lowest note on the drum (aka the “root”), almost always found in the center of the drum.

Overall, you can’t go wrong with either the RAV Drum or the Aura Handpan. Check out the Didge Project store to find the latest prices and availability. We generally have both in stock and we ship within 48 hours from our store in New York City. If you are in NYC, you can also come in and try them out for yourself.

Thanks again for joining us for the Handpan vs. RAV Drum comparison. Here are some great links to check out:

If you haven’t already seen the first comparison we did between RAV Drums and Handpans, check it out here:

The Handpan or “hang” is a convex steel drum played with the hands and tuned with multiple notes. Each handpan is tuned to a particular scale such as major, natural minor, harmonic minor, hijaz, mixolydian, etc. Sonically the handpan is an overtone-emitting instrument that has the capacity to create many layers of sound and ethereal effects and works very well with drone instruments. Originally called the hang (pronounced “hah-ng”) the handpan was invented in 2001 by a little company in Switzerland. The instrument has fantastic resonance, overtones, and subtle variations in sounds beyond the tonal field base keys and can be played upside like an African Udu. Handpans are rare instruments with very few makers and even fewer makers that make quality instruments so it is a very expensive instrument and difficult to obtain one.

The handpans used in this video are Aura Handpans in the keys of B Celtic Minor and D Celtic Minor.

RAV Drum (aka RAV Vast) is a revolutionary new instrument that fuses the concepts behind handpans (hang drums) and tongue drums (traditionally made of wood). Perfectly cut steel tongues vibrate harmoniously together to create an ethereal sound perfect for meditation, relaxation, and other mystical music experiences. RAV was invented in 2013 in Russia. Conceptually the RAV uses cut keys as opposed to the hammer tuned Hang drum, which is not cut or welded in anyway. The RAV has a deep resonance and profound reverb effects where the sound lasts for a long time while the Hang drum sound goes for a much shorter duration. This allows for a lot more space between key strokes in the RAV because the sound carries so long without losing the rhythm, which can make for more experimental playing in some respects than the Hang or handpan. The fullness of the sound and the duration of each key stroke makes the instrument very meditative to play because it renders itself to slow playing but of course can also be played very quickly and rhythmically. The backside of the RAV is not as accessible or resonant as a handpan but can still be played rhythmically. The price of a RAV is 1/3 the cost of a Hang and is also generally easier to play than the Hang for most people. It is also a much more durable and sturdy instrument. The handpan can be knocked out of tune with too hard of a hit and over time may need to get tuned up regardless while the Rav does not and is almost impossible to knock out of tune. 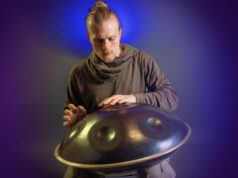 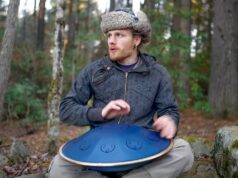